Gambler, occasional fixer, a little bit of a hedonist with a bad habits, including sticking his neck out when he knows he shouldn't

>ABSORB ENERGY
-Rank: Seasoned
-Power Points: 1
-Range: Self
-Duration: Instant
Absorb the energy from a blaster shot with your hand/ body. AE allows the user to negate or even convert damage from ranged energy weapons into health or power. If you are hit by a ranged energy attack roll your Spirit vs. the damage from the attack. Failure means the attack damages you normally. A success means you negate the damage and a Raise means you absorb the damage, healing yourself of 1 wound, 1 fatigue or recover 1 Force Power point.

>BATTLE STRIKE
-Rank: Seasoned
-Power Points: 2
-Range: Self
-Duration: 3 (1/round)
Weapon or fists glow with the power of the Force. Battle strike allows you to imbue your weapon with the Force making it more powerful. Works like the Smite power, but only on your own melee weapon. A success adds +2 to weapon damage, and a Raise adds +4 to weapon damage. Weapons imbued by this power can deflect lightsabers, functioning as cortosis weapons.

Oh yeah and the registration to a ship ( that was a hunk of junk at first before that Duros fellow joined the team).

Jaded gambler and bitter ex Jedi who straddles the line of Light & Dark without crossing it. Has had a few hiccups since expelled from The Order. Had the misfortune of his first master being Count Dooku so that plus breaking one of the less important oaths led to his ouster. Had to turn in his lightsaber but managed to snake a broken one with a functioning crystal. Not quick to share his past with the order…and other people. 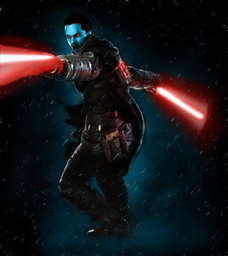